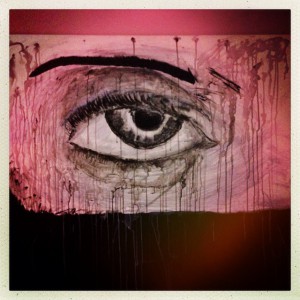 I was brought up in an entertainment family in a predominantly pale neighborhood but my childhood was lived in the midst of many black singers, musicians and comedians. I had adopted ‘aunties’ and ‘uncles’ who were black and never thought any of it. My parents were very adamant that skin color came in many shades. My friends thought our home was terribly interesting and different.

My best friend from the age of 9 was one of the few black students in our school. She was a beautiful, complicated person in a complicated home situation. My parents adored her and I didn’t think much about how different we were, except that she was so beautiful.

When we were 16 my friend and I flew to New York City and stayed with her aunt and uncle who were professional people. They lived in a nice middle class black neighborhood. It was my first experience being the visible minority. I was entirely welcome and included by her family but on the street everyone took notice of me. I felt awkward and exposed.

One night we found the subway connection we took back to her aunt and uncle’s place was no longer running at that late hour. We exited the deserted station to ask for help on the street. It was a sketchy neighborhood and no one would stop to help. We finally flagged down a police car. The white officers rolled the window down halfway and said ‘take a taxi home’. Then they zoomed off leaving us alone. We waited. There were no taxis. Finally a car stopped and the driver said he’d take us home for cash. We were desperate and scared and got into a gypsy cab.

When we arrived home at 3 am her aunt was on her knees in the living room praying for us. She thought we had been kidnapped or killed. There was a lot of hugging and crying.

The next day her aunt read out an article she’d come across. The topic was about why black people laugh so much. It was written by a white person and we collapsed in a heap, laughing hysterically at its absurd reasoning.

I never visited her New York family again and my friend and I drifted after university but the time I spent with them was an important and defining moment in my life. I wish I had let them know how amazing they were and how influential that week was in my life.